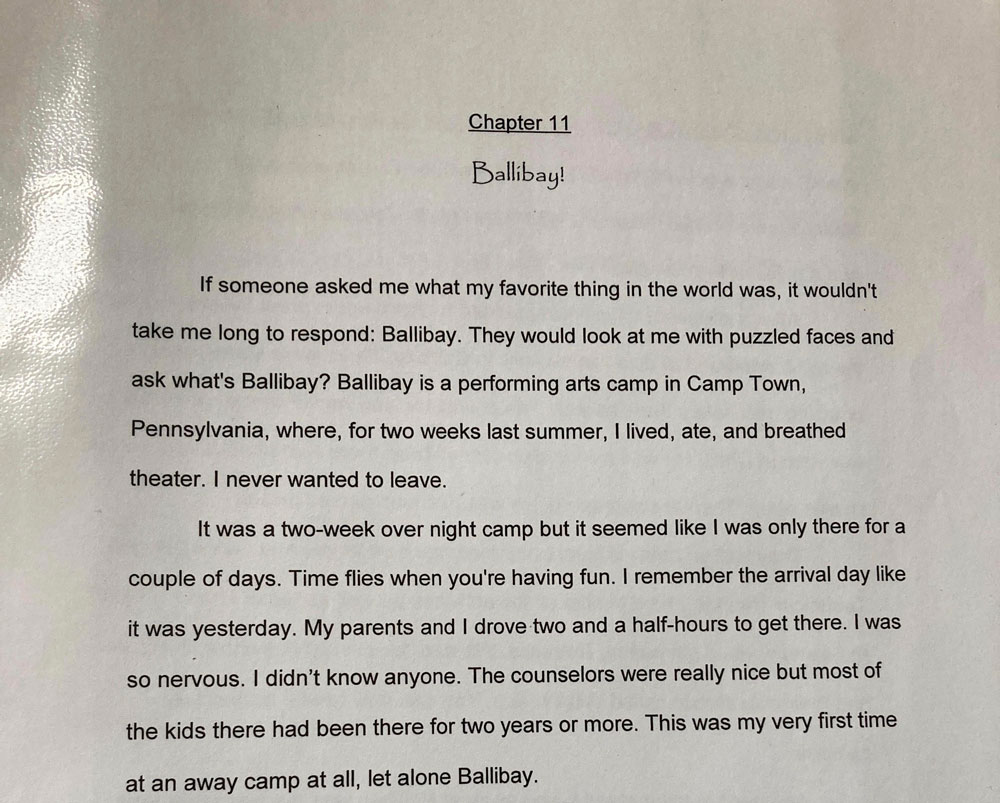 My sister was recently digging through the attic in my mother’s home in suburban Pennsylvania. While searching through dusty and untouched cardboard boxes for extra Christmas ornaments to perfect the tree, she came across an old box of art projects and essays I had written while in elementary school. Mementos that my mother had stored to, I imagine, revisit treasured memories in times exactly like these. Amidst the macaroni art and finger paintings, she came across a memoir project I had written in the sixth grade. Even then, it was apparent I liked writing. The project was nearly fifty pages long and filled with run-on sentences and gusto. My sister texted me photos of a chapter I had written on my favorite place in the world. It was titled: Chapter 11: Ballibay.

In reading these words I had written about a place that has now become such a permanent fixture in my adult life, I realized I didn’t remember the memoir assignment. I didn’t remember which teacher assigned the project, or what grade I received. But what I did remember was what I felt being a camper at Ballibay for the first time, over fifteen years ago. I had always struggled in school. I spent a lot of recess reading books of poetry my mother had tucked away in my neon orange backpack or trying (and mostly failing) to convince the other kids in my class to put on Harry Potter plays I’d written in my composition notebooks. I excelled in academics, but only managed to make one or two friends. If you can believe it, kids weren’t exactly lining up to watch Steel Magnolias during Friday night slumber parties.

Then, when I was eleven years old, my parents registered me for two weeks at Ballibay. I remember having stomachaches in the days leading up to my arrival. I was certain that camp would be just like school. I’d be unable to make friends and would spend the majority of my time reading alone – only here, I wouldn’t be able to go home at the end of the day. What it instead turned out to be, as is so eloquently stated in my sixth-grade memoir, was my absolute favorite thing in the world. A place where I could finally truly be myself. A place where making friends didn’t feel like a chore, but rather a simple and smooth adjustment. An environment where suddenly my fascination with creating my own plays and making up my own songs wasn’t a punchline at recess – but was part of my daily routine. It was my first home away from home. That following Christmas the only thing on my list of gifts was returning to Ballibay.

Rereading the words I had written at age twelve flooded me with memories. I’ve been lucky to have had a few other places that have felt like home since that time. Attending an arts university, apprenticing at the Playwrights Center in Minneapolis, and eventually after a few rocky months, New York City. But Ballibay was the first. It was the first environment where I felt like I was not only allowed to be the slightly strange and quirky child I was - it was encouraged. It was a place I longed for all school year long, counting down the days (literally) until I could return to be with “my people.”

If you had told eleven-year-old Sarah that Ballibay would still be an enormous part of her life, seventeen years later, I think she would be elated – but not surprised. Ballibay has transformed me in so many different ways over my nine summers spent there. But whether it was as a camper, a staff member, or as the Associate Director, it has consistently been a place where I can trust my instincts, make new friends, and truly be myself.  It is a place that even now fills me with warmth and comfort when I pull up that long dirt road. It is the first place to believe in my artistic ability and offer me a job when I was an undergraduate student. The place where I first met my husband – in the Ballibay theater where I performed as a child. It is now the place where I have the privilege to watch so many young people find their first home away from home. Their safe haven. The place where they can truly be themselves.