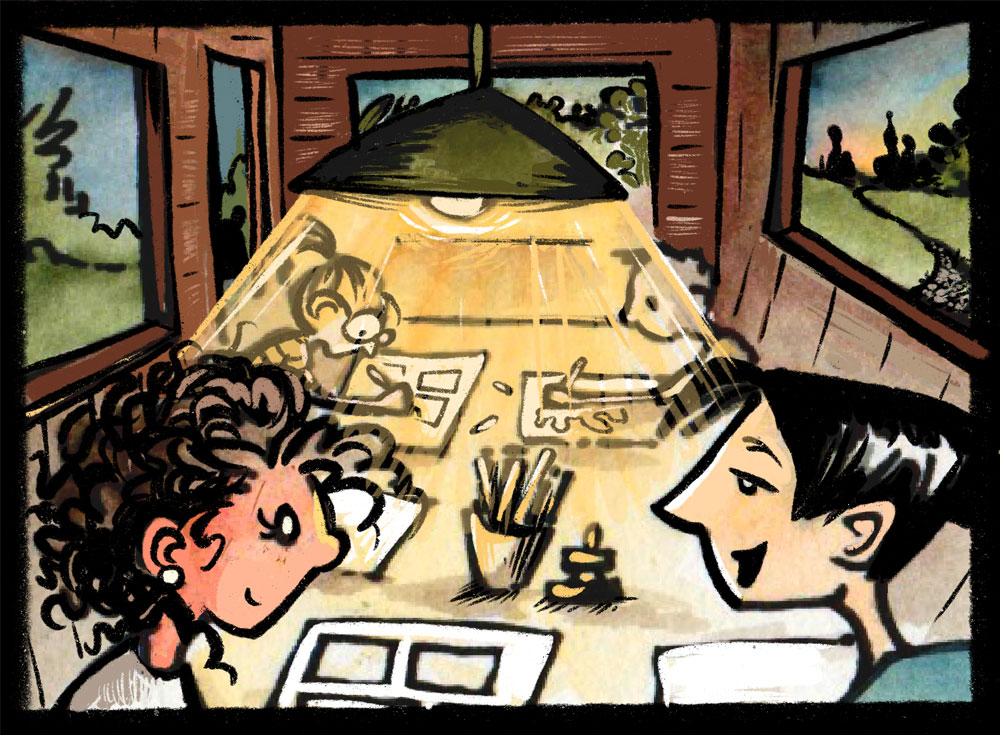 A DAY AT ART CAMP

Daniel loves the visual arts, and horseback riding; and is an occasional gardener. He is enrolled in the two-week individual choice program.

Morning, 7:30:
Daniel loves to help with the horses in the morning. This morning he walks up the hill with two of his cabin-mates who are hosting the live morning radio show, broadcast via low-power FM from the dining hall. By the time he gets to the stables Katia the riding instructor is there along with her apprentice and two other campers. The radio show just started and they have it tuned in, so he gets to hear his cabinmates on the radio as he helps with the morning stable chores. They finish at about 8:10, wash up, and head to breakfast.

Morning, 9:30-11:00:
One of the visiting artists, Saphira, is offering a workshop with campers this morning from 9:30-11:30. She is a ceramicist, so this is great for Daniel because he’s primarily a painter, and so has not had that much exposure to working in clay. It's very interesting to him. The pool is open for free swim starting at 11, so he could go there at 11:00 when the workshop ends, but Daniel is not much of a swimmer. Today he prefers to stay in the ceramics studio (it's so cool there, in every way!) working with Saphira. Many of the other participants have headed off to other activities.

Everyone goes back to the cabins at Noon to get ready for lunch at 12:30. After lunch the whole camp takes a Rest Period, and meets for a one-minute performance somewhere on campus at 2:35.

Afternoon, 3:00-5:00: Daniel chose this to be his daily “studio time.” He heads to the painting and drawing studio as soon as the one-minute performance is over, usually around 2:45, and by 3:00 he is set up and working. He loves to paint, and will usually paint until 5:00, when it is time for the camp to gather for the “5:00 special,” an informal performance. Today the “special” is wind and string ensembles from the music program, performing on the porch of the dining hall. Several kids from his cabin are performing today! Occasionally he can’t sustain a whole afternoon of painting, so he’ll pack up early and head to the garden around 4:30 to see what’s happening there.

Free time, Free store, 6:30-7:00: Daniel almost always joins the after-dinner sports activity on the tennis courts or sports field. Today it is soccer on the sports field, a favorite!

Evening Activities, 7:00-8:00:
Every day, Daniel chooses to go to the riding area at 7:00, or 7:15, whenever the sports wraps up. Some days he has a scheduled riding lesson or a trail ride, but today he is just going there because he loves the horses. He’s brought his sketchbook, thinking he might draw them this evening, but it turns out that Katia, one of the riding instructors, is free, and so Daniel can get extra riding time! He always wears long pants and boots after dinner just in case there is a chance to ride and today he is in luck.

Evening Program, 8:40:
Tonight is the performance of two one-act plays. While Daniel usually enjoys going to the performing arts events, particularly if his cabin-mates are involved, tonight none of the kids in his cabin are in the show, and he is just not feeling it. He elects to go back to the Art Studios. Toshi, the counselor supervising the Studios, brought some super-interesting manga from Japan! Only two other kids chose not to go to the plays, so the four of them got to enjoy reading the manga, and making some sketches based on them.

Jack: THE EXPLORER
Sara: THE ACTRESS
Clara: THE DANCER
Sonia: THE ROCKER who loves TECH
Kai: THE DJ who plays TROMBONE